I have a friend who was a rocket scientist before she went to nursing school to be a nursing engineer.  Suffice it to say, when she talked about why things did or did not work, I considered her an expert witness.  One of the frustrations she had with hospital nursing was the lack of systems.

She explained that systems are put in place in a working environment to make it flow.  She then launched into lots of details and examples which I agreed with.  Totally.

I never forgot about those systems.  I think that as a SAHM, my workplace is every bit as complex as it was as an RN.  Not as many drugs but just as much poop.  Possibly more trauma.  With one child I could definitely input enough energy to keep up with the house without applying many systems.  With two, it was harder, but we moved twice, so I kinda gave myself (lots) of grace.  With three.  Well, let's just say I have been pondering those systems.

Enter shoe caddy outfit idea, once a month cooking (OMAC), and now the great toy crackdown.  I really like going to the toy store.  I think toys are neat.  Toys have taken over my house and won't let me play.  I am starting to get really serious about toys.  I have been paring down the toys that my children have access to for a while now, but yesterday I went Spartan on them.  I seriously only left out the amount of toys that I can clean up in five minutes.  Five.  I cheated a little.  I put the blocks inside a full size sheet and let them play with them on the sheet.  Then when it is time to clean up, all they have to do put the blocks on the sheet and put the sheet in the box.  Thank you, Pintrest.  (Although, I did resist making the cool thing with the quilting and the drawstring)  I am going to get four boxes, label them 1-4 and put them in the "crevice."  On Friday (pastor's Saturday) I will pull out the box that corresponds with the week of the month and plop it on the floor.  Then it will be like having new toys on a day that mom and dad really want to crash!  When Saturday night rolls around...away go the toys and back to five minute land.  Kinda proud of this idea.  Hope it works!

I am not a neat person.  My mom tried.  I try.  I am not a neat person, but I am not a deluded person.  I know that I can't handle much, so I am reducing what I have to handle.  So says the woman with seven chickens, two goats, two garden plans, three kids, and a 5 K planned in May (yep, you read that right).  Sigh.  I am really trying.  Imagine if I weren't!

Here is the aftermath of my cleaning: 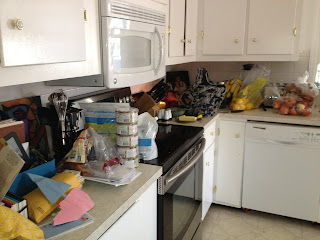 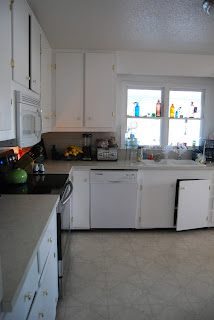 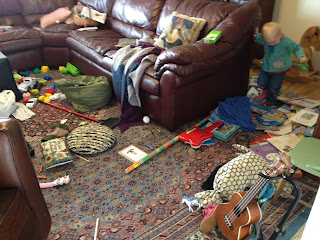 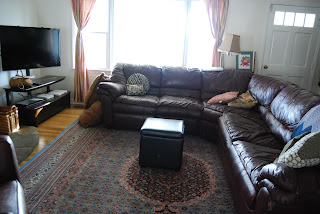 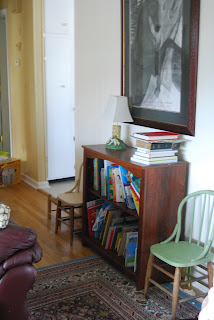